Sara and Kate see Shame… with the lights on.

Presenting our first Dueling Review in Letters From the Mezzanine, in which Sara and Kate discuss Steve McQueen’s film Shame. 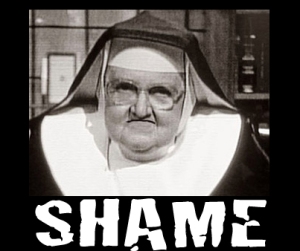 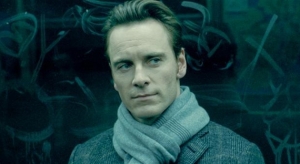 Sara:  So, we got to see Shame–in the same room, same time. Go figure.

Kate:  We also got to fulfill a lifelong dream: watching Michael Fassbender portray a sex addict.

Sara: I wouldn’t call it a lifelong dream, particularly after my sisters and I rented Young Adam with the sole purpose of seeing Ewan McGregor naked.

Kate:  How was that?

Sara:  I closed my eyes during the naked scene.

Sara:  I don’t know. I didn’t want to corrupt my virgin mind. Anyways, Shame… what did you think? Oh wait, should we do a summary or something?

Kate:  Why not? In Shame, Brandon (Fassbender) is a successful businessman in New York.

Kate:  They’re both troubled… Shame had some great cinematography. The scene where Sissy and Brandon are talking on the sofa was just gorgeously framed.

Sara:  The jogging scene was great too.

Kate:  I also could feel the tension during the alternating shots between Brandon and the woman on the train. (Side note: that looked way too dirty to be a modern-day subway car, it looks like McQueen was taking his design cues from The Warriors.) But there was too much style and not enough substance. We hardly get any information on Brandon and Sissy–where they’re from, their family life, etc. No clue to why their relationship is the way it is, and how that plays into Brandon’s sex addiction.

Sara: Yeah, its hard to figure out what exactly you’re supposed to be looking out for besides nudity. I think I was able to find my way through it though. There’s this article by George Simmel called “The Metropolis and Mental Life” and it’s all about how the industrialization of cities has made people distant from one another. The argument is basically that because the city throws so much mental information at us at all times, we’re all kind of in a state of shock and can’t handle personal relationships or lend people any importance. And that’s what makes city folks so blase and arrogant.  We try to hide that vulnerability and not make lasting relationships. This essay was written like 70 years ago, but it’s still relevant, I believe. So, back to Shame. I think Brandon is the prototype of a city male trying to get over this vulnerability, and the film has a lot of focus on NYC–It’s more than just a backdrop. It’s more than just a backdrop. It’s like the other main character. More so than the sister. And there’s that scene towards the end with the train evacuation. It looks like there’s a murder or something at the station, but everyone just shuffles past. I think that made me connect everything altogether.

:  That totally reminds me of the scene where Brandon takes his coworker (who he went on a date with) to a loft for an ‘extended’ lunch break and as they attempt to hook up, the loft has giant windows looking out into the city. And when he’s unable to perform, it’s because the person he’s making a sexual connection he also had made a brief emotional connection beforehand.

Sara: Yeah, but the windows on the city is a great connection too. I didn’t think of that–like the city is looking in on them.

Sara:  Or they’re surrounded, not private.

Kate:  The audience also kind of is a voyeur then. But a detached one.

Sara: So, overall what did you think?

Kate:  So while I was fascinated by the frank depiction of Brandon’s battle with sex addiction, Shame left me feeling quite a bit cold–which may have been its intention, after all.

Sara: And I will never enjoy listening to “New York, New York” ever again.

2 thoughts on “Sara and Kate see Shame… with the lights on.”