Is the Royal Shakespeare Company Racist?

The internet has blown up in recent hours about my favorite British theatre company, the esteemed Royal Shakespeare Company. They decided to produce a centuries old classic Chinese play The Orphan of Zhao, which takes place in historical China–the Yuan period, to be exact. The company did so with a very diverse cast–so diverse that the leads were white, and the 3 Asian actors that were cast (out of 17 total actors) play dogs and a maid.

The Fairy Princess points out oh so brilliantly, the RSC whitewashed this classic Chinese play set in historical China, then proceeded to market on their website (to potential Chinese audience members in Chinese) with the following poster: 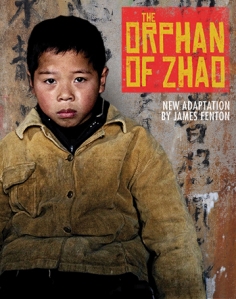 So we already have some well worn racist tropes here: white washing, yellowface, etc. — in spite of the fact that the artistic director, Gregory Doran, really wanted an authentic production, even going to modern-day China to be as authentic as possible, for an authentic production in every way–except to cast Asian actors in leading roles.After the backlash occurred, the RSC put a statement on their Facebook page to explain the “Twitter debate.” Since they were casting a repertory season with rotating actors, it was necessary to have a group of actors who would fit right with all the shows that season. First off, the assumption that a large number of Caucasian actors could play historically-accurate Chinese (and Caucasian of course), is there.  And naturally, the talent wins out: the actors they chose were the best possible. We’ve seen that argument again and again (just put Jennifer Lawrence in a wig to play a darker skinned girl–she was an Oscar-nominated actress!). The RSC rehashes that sentiment, saying, “We cast the best people available for the range of roles required.”That may be true, as there are a huge amount of talented actors out there who could play any role with dignity and grace.  But while this philosophy goes unchecked for white artists, artists of color don’t get the same distinction. In a hypothetical Western revival of Amadeus, you wouldn’t immediately think of an actor of Indian descent to play the Austrian Mozart. And as a community of artists, writers, theatergoers, and critics, we have to understand that this construct exists, that it is an artificial one rooted in racism and privilege, and we must constantly work to address it.

Such an address is not “moaning,” as one Facebook commenter wrote on the RSC page, but an honest appraisal of how we make art be as meaningful as it can be. This of course, is by no means easy. It’s hard to chuck one’s privilege out the door, and recognize one’s mistakes, no matter how well-intentioned. It’s especially upsetting since the RSC has a long history of “non-traditional” casting, with actors of Asian and African descent playing leading roles in productions of  The Taming of the Shrew, A Midsummer Night’s Dream, and many other Shakespearean plays.

They even cast a two-hearted extra-terrestrial in a West End production of Hamlet to play the eponymous tragic hero.

Even more importantly, we need to be aware of this disparity as people. The RSC said in their statement that the  “multi-cultural make-up of our winter season company reflects British society.” This is how the art-reflecting-life continuum comes into play. If we have these conflicting views about race in our theatre, then it is even more crucial an issue in our lives beyond the stage.