Okay, okay. So we’re already know that Les Mis has religious messages and pretty blunt moral meaning up its wazoo. In other words, there’s a lot of this going on 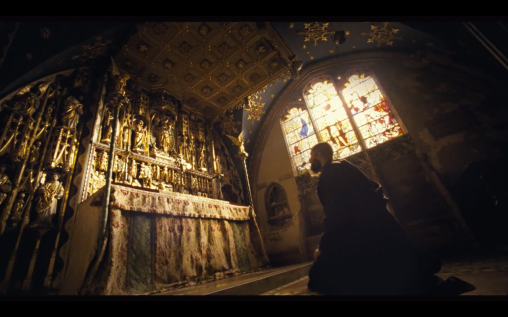 and more of this

Yup. It’s all nice and stuff. Rising out of difficult circumstances through faith and love. Valuing the importance of justice and forgiveness. The difference between man’s law and God’s law.

But I don’t think I’m telling you anything new. In fact, I’ve always been bothered by how BORING Valjean becomes after he meets the bishop. He suddenly switches from a life of resentment and frustration to one of faith and love. Which, again, is all nice and stuff. But really, dude? All your problems just end within the first 20 minutes of the show and now you’re all holy and whatnot? Part of me wished that Valjean still held some of that resentment and anger, particularly in his post-revolutionary moment when all’s gone to hell and back. I mean, who really cares about some rich recluse  living with a pretty girl while there’s a people’s revolution happening?!

The film version, I believe, recognizes this dilemma. I argue that in the film, Valjean’s journey to becoming a whole and good person does NOT end at his encounter with the bishop. In fact, the film shows that one CANNOT be a good person without facing the social crises that surround you. Religion, faith, and love, therefore, are intrinsically tied to social justice.

While Valjean/M. le Maire has become a well-respected, generous, and kind leader, he remains oblivious to the criminal injustices occurring right under his nose between Fantine, the foreman, and the other workers. In fact, the film goes as far as to show that Valjean willfully ignores Fantine’s cries of help to meet with Javert. Valjean is much more concerned with his interior life, his own salvation, than the well-being and fair treatment of those he employs. This does not mean he’s a “bad” guy. Far from it. But his encounter some time later with the dying Fantine shows him that he must tie his faith to acts of justice and love. This is why I believe that Fantine is the “heart” of the show.

Years later, living with a mature Cossette, Valjean is again in danger of letting his interior life supercede his connection with others. He retains all of his secrets, lives as a recluse, and seems like a rather harsh father. On the other hand, we now have Marius who, like Valjean, is struggling between choosing a life devoted to love and one devoted to social justice, as depicted in “Red and Black.”

Marius is ultimately the hero of the story (more in the movie than on stage, because Eddie Redmayne is so gosh darn likeable!) because he is able to unite these two forces together. He’s both a lover and a fighter, if you will. He can lead a fulfilling life united with Cossette while still flaunting his revolutionary peacock feathers. It’s also THROUGH HIM that Valjean comes to realize the importance of this blend. It’s THROUGH HIM that Valjean fights at the barricade and sees the lives lost in the pursuit of justice. It’s why Valjean, having only read his letter Cossette, immediately feels an affinity with this young student and risks his life to bring him home (badum psh?). After Fantine’s death, Marius is the new “heart” of the film. Marius is what Valjean must become.

Thank you, movie and Tom Hooper (and Eddie and Hugh and Anne) for prolonging Valjean’s journey and making me actually care about Marius!

I also think now is a good moment to say that I call dibs on this one: George Blagden and Aaron Tveit die so well together….