Nick Cannon’s Whiteface is not the same as Blackface

Apparently, hosting a talent show and being Mr. Mariah Carey does not a wise man make. Nick Cannon made bad choices this week: 1) dressing up like a white, blonde boy-man whom he named “Connor Smallnut,” 2) posting more than zero photos of this stunt on Instagram to promote his new album White People Party Music, and 3) hashtagging these photos with weird stereotypes like #FarmersMarket and #DogKissing and #CreamCheeseEating. Do people of color not like cream cheese?

It’s a silly publicity stunt that reflects what happens when you combine poor judgement and an over-abundance of free time. But it is nothing more.

Lots of people were quick to attack Nick Cannon’s actions as racist. I saw more than a few reactions saying that Nick Cannon should suffer as much repercussion and negative attention for his stunt as celebrities who have worn blackface. Their arguments usually make the following points:

2) Whiteface is just as racist as blackface and Nick Cannon is teaching his fans to resent white people.

3) These two actions should be treated exactly the same way.

On the surface, this argument sounds rational. Ideally, we should be working towards eliminating resentment between races and Nick Cannon’s certainly irritates that a bit. But this argument ignores the politics of power behind white/blackface. Nick Cannon might be irritating, but his whiteface is not a tool of oppression. And it is not racist.

You see, racism is commonly thought to be like a formula. Prejudice + Power= Racism. In our society, which is still undoubtedly recovering from the historical oppression of people of color, white male Americans hold the reins of socio-economic power. You can point out the exceptions to the rule, but they remain just that, exceptions. Inequality is still rampant in our neighborhoods, in our corporations, in our schools, in our justice system, and in our film and music industry.  This is why there is a difference between a racially-charged comment on white people and a racially-charged comment on people of color. If a black person calls a white person a “cracker” or a “white bitch” on the street, it is insulting and hurtful. But if a white person called a black person “nigger,” not only is it insulting and hurtful, it carries the white person’s privilege as a white person (whether they admit to having privilege or not). It carries the historical use of the word as a tool of oppression. And it perpetuates an image of this black person that weighs heavily on people of color even today and continues to close the doors of opportunity to them.

When Nick Cannon wears whiteface, his action does not carry the same implications as blackface. White people might be insulted, but at the end of the day, they can walk away unscathed with the reassurance that Nick Cannon’s view of white people won’t harm their chances of getting a mortgage or scoring a job promotion. At worst, Nick Cannon’s stereotypes might be used to target certain types of white people (‘oh, those reckless suburban kids!’ ‘oh, those privileged L.A. teens!’).  Black stereotypes, on the other hand, are attributed to an entire race with few exceptions. It’s assumed that they’re ratchet/ghetto. If a black man wants to be taken seriously by his peers (or by Bill O’Reilly), he has to fight extra hard against these stereotypes, prove he’s not like that, and adopt culturally pre-approved characteristics condoned by those in power (ie. white males) such as wear smart glasses and suits, not sag his pants, and trade dialectical resonances in his vocabulary for ‘standard’ English. And when the How I Met Your Mother cast dresses in yellowface and enact Asian stereotypes (especially when they don’t have any people of color in the cast), they too are targeting an entire race with an image of Asian people, who are then held responsible to disprove the stereotype in order to be taken seriously as an employee, a leader, a romantic interest, etc. This is why representation in media is so important, so that the public sees realistic images of people of color as complex, fully-realized individuals i.e. not Rooney Mara’s imitation of them.

Just to reaffirm, by no means is Nick Cannon’s stunt amusing or tasteful. In case you need any more proof that Nick Cannon is a moron, he continues to defend his whiteface by comparing it to blackface and bragging about his yacht. 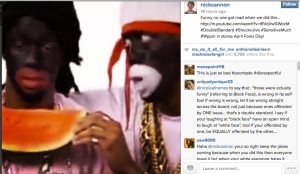 I personally don’t care if he publicly apologizes or not, but whatever he’s doing, he’s going about it the wrong way.  What I find more interesting, though, is the title of his album, White People Party Music. A subtle jab at white people’s appropriation of hip-hop even though we continue to claim that hip-hop culture is degrading to black society? Given the week Nick Cannon is having, probably not.

by Norma, by Sara, Film/TV, Miscellaneous