Bullets Over Broadway is a Homage to the Broadway Musical 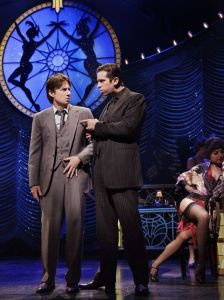 Hands-down, the true hero of Bullets Over Broadway is Cheech (Nick Cordero), the hitman-turned-playwright assigned to protect Olive Neal (Heléne Yorke), the gangster boss’s girlfriend, while she rehearses for a new Broadway play. Cheech interferes with the script with several suggestions that win favor with the actors and slowly gains sway over the production.  And while he proudly professes to burning down his school because he needed a science project, Cheech proves to be an adept writer and understand audiences better than the show’s pretentious and verbose writer/director David Shayne (Zach Braff).

In a way, Cheech becomes a spokesperson for the average theatergoer. He more than any of the other ‘artists’ values the show’s integrity, going so far as to betray his mob boss when Olive’s ridiculous acting efforts put the show in jeopardy. I mean, how many of us yearn to strangle that one terrible actor? Or tell a playwright to just say what s/he actually means? Cheech is our wish-fulfiller, and the result is something much like Bullets Over Broadway itself– a feel-good, bawdy, and wonderfully entertaining show that doesn’t pretend to be deep or complex but rather gives us exactly what we want out of a typical Broadway musical. Go down the successful Broadway musical checklist and it’s all there. The choreography from director Susan Stroman is sexy and surprising. Sets by Santo Loquasto and costumes by William Ivey Long are inventive and whimsical. The revolving wooden stage for the show-within-the-show was especially exciting to watch.  Woody Allen’s book and songs (selected from classic era showtunes in public domain) are full of his trademark humor, but also reveal a Cole Porter-esque playfulness (more on Mr. Porter’s influence later). And the musical affords star turns for nearly all its lead actors. Zach Braff holds his own on a stage of veteran Broadway actors, and his David Shayne (like Andy Karl’s Rocky) is much more of an homage to the original than an imitation. The female performances, however, are the biggest treat. Heléne Yorke is simply hilarious as club dancer Olive and Marin Mazzie is superb as aging diva Helen Sinclair. She can control the direction of a scene with a simple nod of her head.

A Broadway musical is the exact opposite of the broody, angsty script David Shayne writes. The standard American musical, the stuff of Cole Porter and his peers, presents a sharp detour from the psychological musings of Eugene O’Neill or the heavy, provocative drama of Arthur Miller. Bullets Over Broadway celebrates the musical that dazzles, the musical that entertains, that simplifies things instead of compounding them. This is without a doubt the reason why Woody Allen and Glen Kelly use old showtunes like “Let’s Misbehave” and “Yes! We Have No Bananas”, in one of the weirdest closing numbers ever. These songs hearken back to a time where the worried and anxious David Shaynes and Woody Allens could just sit back and enjoy the show.

Bullets Over Broadway plays at the St. James Theater. Click here for tickets and info.