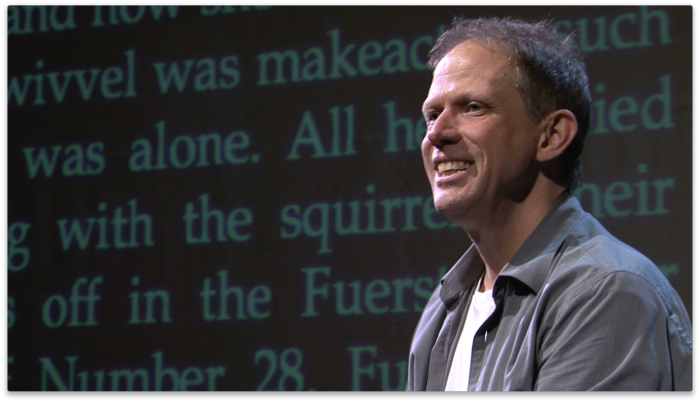 Summary: James Joyce geek Adam Harvey gives a one-man crash course on one of (if not the most) confusing texts in the English language and reads aloud noteworthy excerpts. Which, by the way, is no small feat.

Why Go: Whether you’re a PhD student in modernism or just a discerning reader, James Joyce is one of those intimidating heavyweights one tends not to approach without some guided assistance. Consider this your user’s manual. Warning: this play might actually make you want to read Finnegan’s Wake.

Thoughts: Harvey’s piece gently reaches out a hand as you step into the wild world of Finnegan’s Wake, but also, more to its credit, know exactly when to take it away, letting you roam free and explore. As Harvey explains, it is exactly what Joyce intends with his confounding work: to allow the reader/listener to hear the text through his or her own experiences and co-construct meaning, albeit one that is almost altogether subjective. There’s a playful quality to this type of learning, this venturing forth and seeing how the text speaks to us individually. Joyce is one playful son of a gun– Finnegan’s Wake is chock full of puns, wordplay, perversion, whimsy, and adventure.

Harvey is an excellent teacher and an extraordinarily talented performer. His role in the piece is a humble yet awe-inspiring one. Even though words like “Bababadalgharaghtakamminarronnkonnbronntonnerronntuonnthunntrovarrhounawnskawntoohoohoordenenthurnuk” roll right off his tongue, and he has clearly put years of time, energy, and love into his study of Finnegan’s Wake, Harvey never assumes a position of authority or power. There’s a genuineness to his presence, as if you’re in the same room as some one who has realized some kind of empowering truth, like a Buddha or something, but who never assumes the role of truth-teller, because no one knows as well as we do what our own personal truths are. If Finnegan’s Wake is sacred scripture (one meant to be experienced, not followed) then Harvey is its priest, and we’re more than happy to be in his congregation. (The last religious metaphor in this post, I promise.)

I’ll Say She Is adapted by Noah Diamond

Summary: Written by Will Johnstone for the Marx Brothers, I’ll Say She Is premiered on Broadway in 1924 and launched them into Broadway and Hollywood stardom. It features vaudeville acts and musical numbers loosely tied together by a plot about an heiress looking for fun.

Why Go?: I’ll Say She Is was never made into a film, unlike the Marx Brothers’ other Broadway shows. And who doesn’t love the Marx Brothers? Note: replying to that question in the negative only proves your awfulness as a human being.

Thoughts: I was really hoping that I’d enjoy this production more than I did.  I’ll Say She Is does retain a lot of what makes the Marx Brothers so iconic (the impressions are spot on, particularly Noah Diamond’s Groucho and Seth Sheldon’s Harpo), but overall quality of the piece felt a bit subpar. More effort was put into the costumes than in any of the staging or direction. The musical numbers were slow and dull, with the actors often just standing in one spot throughout or repetitively gesturing at some far idea of choreography.  The vocal talent was unfortunately meager. Even the chorus seemed to be struggling to hold up a song. Everything about this show felt clunky and  half-rehearsed. I think that with tighter staging and a more energetic pace, this musical can replicate what it must have felt like to be at this fame-delivering hit in the 1920’s.

Summary: Absolutely Filthy imagines the futures of the “Peanuts” characters, who relive their pasts when the gang comes together for Charlie Brown’s funeral. Though for legality’s sake, they’re, you know, not “Peanuts” characters. Or whatever. The play largely focuses on Pigpen, who grows up a drug addict and homeless, and is now seeking redemption from his old friends.

Why Go?: The darkly hilarious show got rave reviews at the Hollywood Fringe, performs to packed shows every night, and might have life for much more time to come.

Thoughts: Let’s just start with saying that Brendan Hunt is absolutely amazing as Pigpen and gives a performance that is unique, striking, and authentic. Though the ensemble gives wonderful performances, this is Hunt’s show. Pigpen’s journey to redemption is the best case for catharsis I’ve ever seen and literally left me sitting in my seat reflecting on how much of this show I could genuinely apply to my own life. Hunt uses a dusty hula hoop to simulate Pigpen’s dust cloud. It’s an apt prop to use– not only does it physically place him at a distance from his old friends, but it also takes labor to uphold.  It is Pigpen’s dust cloud to maintain, and his is the freedom to let it go.

Absolutely Filthy played its last Fringe performance this afternoon, but tune into the website to actively hope for more performance and support the show.

One thought on “Fringe Round-Up! Part 7: Don’t Panic It’s Only Finnegan’s Wake, I’ll Say She Is, and Absolutely Filthy”