An American in Paris Is the Mature, Sweeping Musical We’ve Been Waiting For

An artist, a composer, a nightclub singer, and a ballerina cross paths in post-Vichy Paris as they search for love and inspiration in a city recovering its identity. Based on the award-winning 1951 film of the same name, the new musical An American in Paris doesn’t quite feel like an adaptation, nor derivative in any sense of the word. It feels like a classic Broadway musical, thanks in large part to the recognizably brilliant Gershwin score, but one with the mature clarity and nuanced tonality achieved in opera, ballet, or sophisticated, risk-taking revivals.

How does An American in Paris achieve its finesse and precision? After all, it doesn’t have the tragic plot or overtly complicated characters that usually qualify a narrative piece for dramatic success. Here, the aforementioned artist, composer, and singer vie for the attentions of the ballerina, Lise. Lise becomes engaged to Henri, the singer, though her love for him is based less on passion and more so on a sense of responsibility towards him and his family for helping her during the war. Lise’s true attraction lies with Jerry, a ex-pat and military veteran living in Paris as an artist. However, Jerry is also involved in a relationship founded on duty and convenience with an American art patron named Milo Davenport. Lise gets cast as the lead ballerina for a ballet company owned by Henri’s family in a production backed by Milo. Jerry comes on board for set design and his friend Adam composes the ballet’s score, bringing all the characters together in service of their love of Lise and their love of art.

Likewise, the show unites excellence in each of these art forms in service of this simple, wistful, and often joyous story. Take, for example, the opening scene. A large white cloth hangs over a piano center stage. Nazi images are projected onto the cloth. The cloth then drops dramatically from its reins and the ensemble drapes it over the piano and themselves as the projections changed into the French flag. It’s a powerfully symbolic gesture that captures the sudden disruption of war, the sweeping change over the country and its citizens, and the new search for national identity in just three short movements. The subsequent dance number (though to call it a number would betray the fact that in this production, dancing and dialogue weave seamlessly through each other) also presents much with little. As you admire the talent and movement of this cast, you’re also absorbing the busy, urban setting, the melancholy of its newly freed streets, and the longing of its lead characters.

The emotions of behind the production feel pure and unmitigated. This is partly because of the simpleness of this production, and I don’t mean simple as a synonym for minimalist; nor does it mean that the show doesn’t dazzle. The set design by Bob Crowley relies heavily on projections and white moving panels, and the fact that he so aptly and authentically re-creates the tone and feel of 1940s Paris (this is not the frilly, fluffy Paris of Gigi) with so few parts is just one dazzling element of a show full of magic. The choreography by director Christopher Wheeldon services the plot. You never feel like a dance number is out of place or separate from the rest of the production, as you would in the dream sequence in On The Town or that long dance break in Singing in the Rain. Here, dance moves the plot forward in the same way a well-written scene would, though that’s not to say that the show’s book suffers. In fact, perhaps because there’s less of it, the dialogue is so much more judiciously used. The lines are imbued with resonance and importance such that to cut one might change the scene entirely. 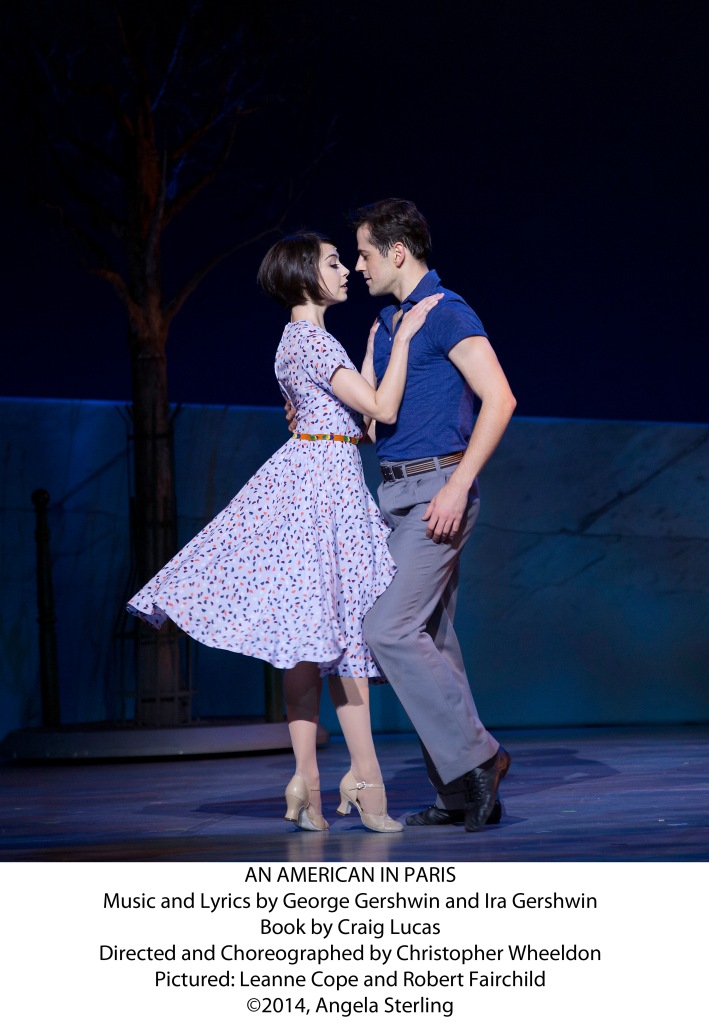 This gorgeous musical is in great hands with a truly remarkable cast. Leanna Cope is a perfect focus for the production– charismatic, elegant, witty, and subtle, she is extremely gifted and a favorite of audience members sitting around us (“She should’ve been Gigi!”). Robert Fairchild as Jerry is more than a capable substitute for Gene Kelly. Together their dance number left us in open-mouthed awe. And if Max von Essen doesn’t win a Tony for his joyful and genuine performance as Henri, I might just become an ex-pat myself.

One of the questions that comes up repeatedly in the show is whether art, after war, is possible, echoing Theodor Adorno’s famous statement that there could be “no poetry after Auschwitz.” Is art escape or reflection? Should art confront us with the problems of humanity or look forward to the future with joy? An American in Paris does both admirably, a master class in how theater can be a truly special, human experience.

For more thoughts on the show, listen to our podcast!

One thought on “An American in Paris Is the Mature, Sweeping Musical We’ve Been Waiting For”