‘Tonya and Nancy: A Rock Opera’ Is Deliciously Camp

While Hamilton and Burr duel just a few blocks away, the New York Musical Theatre Festival brings us another infamous, Olympic-sized rivalry set to song. Tonya and Nancy: The Rock Opera has become a highlight of the summer festival, and it’s easy to see why: it’s gloriously camp and relentlessly energetic with a scandalously good cast bringing home the gold. 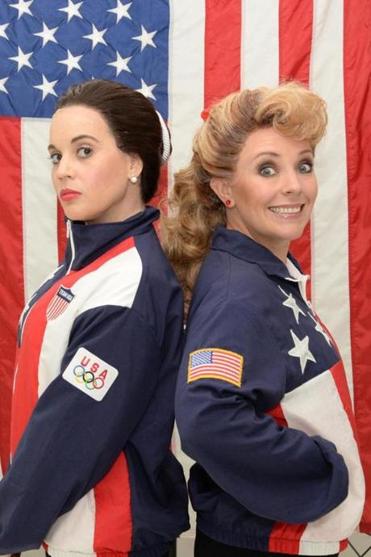 Unless you were born after 1994, you’ll know that the titular competitors refer to figure skaters Tonya Harding and Nancy Kerrigan. Their battleground? The 1994 Olympics, where both Harding and Kerrigan compete on Team USA. The two women were from polar opposite American backgrounds. Harding was a Portland-raised, truck-driving, gun-wielding high-school dropout who was perceived as a ‘bad girl’ in the press. Kerrigan was graceful ingenue from middle-class New England, with sweetheart looks enough to cover Time Magazine. Scandal erupted when Harding’s ex-husband Jeff Gilloly hired a hit man to whack Kerrigan on the knee shortly before the competition. The rivalry grew only more fierce until neither woman winning the gold in the end. Written by Elizabeth Searle (book and lyrics) and Michael Teoli this new musical tracks the girls’ upbringing, their competition, and the aftermath.

Campy, self-aware comedies thrive in festival environments– the low-budget, makeshift limitations of a festival like NYMF or Fringe do more favors for fast-paced, witty works than serious, realist dramas. Tonya and Nancy, however, manages to give us a thrilling, high-quality production with all the heart and passion of an indie comedy. The ensemble here works their faux-skates off with well-choreographed, dynamic numbers and serve multiple roles. Their energy was astounding. Jenna Leigh Green is a great fit for fresh-faced Nancy, and is reliably graceful in both her defeats and victories. Tracy McDowell is a hilarious Tonya, playing up her naive penchant for bad boys and bathrobes. Liz McCartney plays both mothers (Nancy’s simple and kind mother versus Tonya’s drunk, crude mother)– her quick changes and inventiveness are highlights of the show. And Tony Lepage has powerhouse pipes and charm, even as scumbag villain Gillooly. Yet, Searle and Teoli always treat Nancy and Tonya with good will and perspective. The show may be satirical, but the author’s sympathy for the womens’ situation shines through at all times. The songs are not only entertaining and thoughtful, but also tremendously catchy–my feet couldn’t stop bouncing throughout the entire show (sorry, neighbor!)

If you were enraptured with this saga (along with millions of others around the world), go see this show. You will shout with glee and love for this good-natured, endlessly entertaining show. And if you didn’t, you’ll catch on soon enough, and the work’s ingenuity will be enough to keep you hooked.

Tonya and Nancy: A Rock Opera plays at NYMF through July 16. Tickets here.