1-Lyricist Tim Rice and composer Andrew Lloyd Webber were in their twenties when they wrote Jesus Christ Superstar. Their inspiration for Superstar grew from the idea of approaching Jesus from Judas’ point of view.

2-They previously wrote Joseph and the Technicolor Dream Coat together. Their next collaboration would be Evita.

3-They released a record of the music first because producers would not stage it. The pair credit the show’s unique style with its lack of a book and its origins as a record: “… the fact that we made Superstar initially for record meant that we cut out the book,” Rice says. “We hadn’t actually written a book… so it might’ve been ‘Hey, Judas, take a seat,’ or whatever. I mean, it could’ve been awful. It worked so much better and was much less pretentious, if it was a sung-through work.”

4-The record became a hit in the United States. Even the Vatican radio station played it. The play was produced on Broadway in 1971 as a result of its success.

5-Both stage and film versions were met with protests by religious groups. “There’s always somebody standing around with a protest sign saying it’s going to destroy the universe in terms of ‘that rock & roll music,'” says Ted Neeley, who played Jesus in the film.

6-Tim Rice’s comments that he perceived Christ not as God but as the right man in the right place produced even more anger towards the production.

7-Among other controversial aspects of the show are the fact that the Resurrection is not shown, that Judas’s point-of-view is privileged, that Judas blames God for his suicide, and that Mary Magdalene claims Jesus is ‘just a man.’ 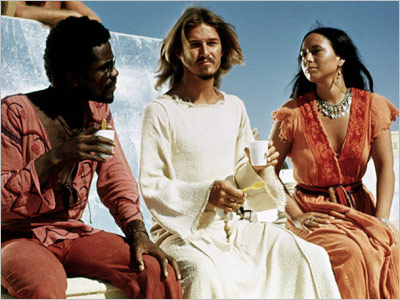 8-Norman Jewison directed the 1973 film adaptation, framing the musical with the troop of actor arriving by bus in Israel and preparing for the performance. Jewison’s goal was to not have audiences believe that the movie was trying to depict sacred, biblical figures, but rather very human extensions of them, much in the tradition of medieval passion plays.

9-Webber has been quoted as hating the original Broadway production as well as the film.He won a Drama Desk Award for “Most Promising Composer.”

10-Jewison previously directed noteworthy films like In the Heat of the Night and, in my opinion, the best movie-musical ever, The Fiddler on the Roof.

11-Many people see the narrative as essentially a love-triangle between Jesus, Judas, and Mary Magdalene. We are left to wonder if Judas betrayed Jesus out of his claimed disillusionment with the movement, or out of jealousy.

12-Certain productions amp up the homoerotic undertones in Judas’s staging and his refrain of “I Don’t Know How to Love Him.” Because, why wouldn’t you?

13-Another popular interpretation of the musical is that it is a commentary on celebrity status in a culture that doesn’t understand how to embrace Jesus’ authentic message. Scholars see celebrity culture as a symptom of late capitalism, in which consumers’ narcissism is built on a fragile bed of superficial purchases and mass media. Jesus is raised up as a celebrity and then crucified by his own people within a week of events. Critics view superstardom as the last remnants of religiosity in a culture that has rejected traditional deities.*

14-Judas is widely viewed as the tragic hero of the play. In a 1971 Life Magazine article, Rice is quoted as saying: “In the Gospels, Judas is a cardboard figure. Every time he is mentioned there is a snide remark. I believe that Judas was the most intelligent of the Apostles and that is why he got into such a dilemma.”

15-The show has several revivals in the past decade. In 2000, “Great Performances” recorded a film version starring Glenn Carter as Jesus. A Broadway revival starring Paul Alexander Nolan and Josh Young opened in 2013.

16-French actor Jerome Pradon played Judas in the Great Performances film and then went on to play Herod on stage.

17-In 2012, Webber produced a reality show called ‘Superstar’ to find the next Jesus for a new arena tour. Ben Forster won. Musician Tim Minchin, who also composed Matilda the Musical, played Judas, and Melanie C from the Spice Girls was Mary.

18-There is a Chilean heavy metal band called Jesucristo Metalstar that has performed the show for a decade.

19-A Peruvian prison staged the show in 2014 during Holy Week. According to the press release, the production was meant to encourage prisoners in the rehabilitation process.

*See “Andrew Lloyd Webber and the Culture of Narcissism” by Vagelis Siropoulos in Studies in Musical Theater 4.3