Congrats! You’ve voted and done your civic duty! But these people haven’t! Because they’re fictional, you say? Sure, okay. But really. Now that we’ve made our decisions, ho would these Broadway characters, all New York residents, vote for? 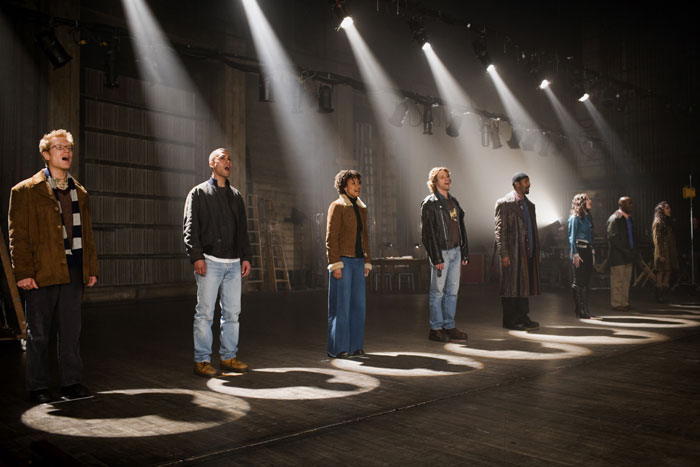 Benny would have quietly nodded at all his liberal friends and picked a Republican candidate like Ted Cruz or Rubio.

Tom, depending on his activist background, could either feel the Bern or go independent.

Mark would TOTALLY feel the Bern.

Roger doesn’t want to think too much about politics, so he’ll just vote Bernie so that Mark doesn’t talk about politics in the apartment they share all the damn time.

Since Rosario Dawson played Mimi in the film version, I’ll go with Bernie for her too.

Maureen would talk about radical politics IRL, but then go vote Hillary… except she missed the registration deadlines and can’t vote anyway.

Joanne is a tough one. I think she would be indecisive of Hillary vs. Bernie until the very end.

And Angel is dead and can’t vote for anyone. Sorry, Angel.

Alexander and Eliza are all up in the Clinton campaign. Hell, they’re even trying to get her on the $20 bill.

Aaron Burr is waiting quietly in the wings of the DNC, and he’ll vote for whoever is polling better.

Angelica published an editorial in the NYT about why Hillary’s not the perfect candidate, but she’s the best.

Thomas Jefferson is is a Bernie Bro, more out of fashion than by choice.

Horace votes Hillary, because it takes a woman.

Dolly votes for Hillary in the best and most elaborate hat you’ve ever seen.

Cornelius and Barnaby are pro-Bernie, probably went to high school with him.

Irene and Minnie are small business owners in the Garment District who need a tax break. Hillary, for sure.

Daddy Warbucks is the billionaire with a heart of gold. He’s already bffs with FDR, and so going with Bernie just makes sense.

Grace goes with Bernie too.

Ms. Hannigan identifies with Hillary’s struggle as a woman making her way to the top. She’s voting Hillary.

Rooster and Lily are Trump all the way.

Sandy’s a dog and therefore above this crap.

Mother, the epitome of balanced reason and emotion, is pro-Hillary.

Father’s going for Cruz, and feels unnaturally good about it.

Mother’s Younger Brother was a registered Independent but switched to Democrat last month for Bernie.

Coalhouse and Sarah are dead and judging us all from heaven.

Tateh values the struggle for the American Dream and lived it for real. He’s Cruz in ideology, but Hillary in practice.

Nina would  be a conflicted woman of color. She would have been a high school volunteer for Hillary’s senatorial office in NY and/or the presidential campaign against Obama. But then over the years she would wonder if her policies actually helped America and be torn.

Usnavi would feel the Bern.

Nina’s dad would embarrass everyone by standing up for Cruz/Rubio because they’re both Latino and, let’s be real, he’s totally a Republican.

Benny will be voting Hillary unless Nina tells him something different.

Vanessa goes to visit the salon girls, where they all huddle around her phone to take the Which Candidate Matches You Best quiz–in espanol.

And Sonny YOU KNOW is at the Bernie rallies, along with his bestie Graffiti Pete, who’s breaking internet headlines (and some local city laws) with his political murals.

PS Abuela again would vote for nobody, she’s dead.

Seymour is the hard-working little guy who’d have a Bernie sign on his ‘Somewhere That’s Green’ front lawn.

Audrey’s a bit embarrassed about the lawn sign. She likes Hillary’s poise, but as someone who grew up on Skid Row, she’s got a radical side to her deep down.

Audrey II already has a contract with Trump to spread her seedlings across the US-Mexican border.

Nathan Detroit, ever the gambler, is going for Bernie just to see the little guy win. Also, Miss Adelaide (with that accent!) is voting for Bernie,  and will hit him if he doesn’t.

Sarah Brown is out canvassing for Hillary in East New York.

Hey guys, we know we were mad inconsistent about dead characters. It’s just too painful to imagine what Angel and Abuela would do if still alive. We already made our peace.

by Norma, by Sara, Theatre, Uncategorized