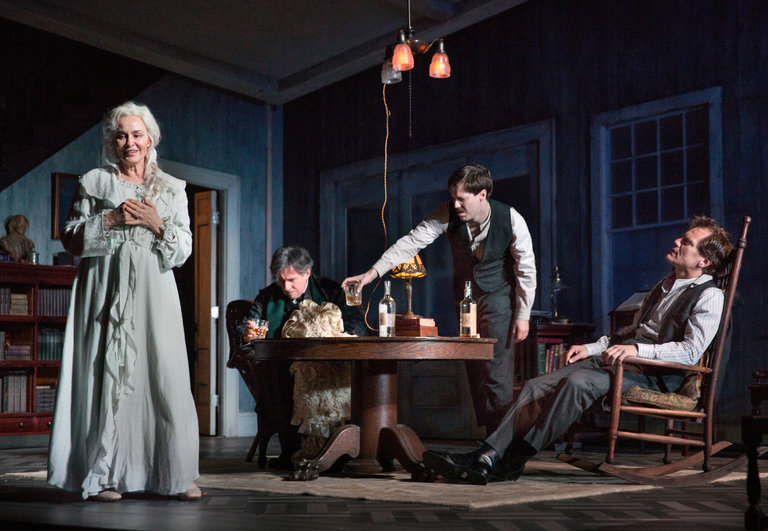 Long Day’s Journey Into Night premiered on Broadway in 1957, over a decade after Eugene O’Neill had originally finished the play. The autobiographical work about O’Neill’s family was not to be produced until after the his  death, at the bequest of the playwright. Long Day’s Journey has since become a Tony and Pulitzer Prize winning work that is an American theatre classic.

Now, Roundabout Theatre has revived Long Day’s Journey for a Broadway run at the American Airlines Theatre. The play follows Mary Tyrone (the resplendent Jessica Lange), wife to James Tyrone (Gabriel Byrne) and mother to James Tyrone, Jr. (Michael Shannon) and Edmund Tyrone (John Gallagher, Jr.). Edmund keeps coughing in a way that hints at something worse than a cold, and James and Jamie seem to be in a contest for most embittered alcoholic. But the most troubled person in the family by far is Mary, who is struggling with an opiate addiction that threatens to break the strained family bonds.

Whenever a older show makes its way back to the Broadway stage, I always wonder why it’s coming back. (Besides the obvious reasons: the producers paid for it, a movie star wants to be taken seriously for their acting, it’s a beloved show that hasn’t been on stage in eight billion years, etc.) While watching Long Day’s Journey, I found myself asking that question repeatedly. I will say that Jessica Lange’s performance is worth price of admission alone: she is captivating through and through, giving humanity to the troubled characters she plays. Mary is no different: she is charming and coquettish in one breath, sullen and rarely sober in the next. But you feel for her plight, despite the anguish she gives her family. The rest of the cast also does well: Byrne is enigmatic as the patriarch, Shannon takes on his role as the contemptuous son with a touch of knowing humor, and Gallagher Jr. is adorably troubled as always. (Also, Colby Minifie is delightful as Cathleen, the family maid.) The performances, guided by the clean and careful direction of Jonathan Kent, make Long Day’s Journey a solid revival. Mary’s addiction problems are just as relevant as they were in O’Neill’s time, if not more today, with the rise of opiate addiction in the United States.

But we can’t get away from the fact that Long Day’s Journey Into Night is, well… long. Clocking in at 3 hours and 45 minutes, Long Day’s Journey is even longer than most revivals of Shakespearean tragedies. And no amount of sleek direction or compelling performances can change that. While O’Neill’s characters are compelling and oh-so-human, their dialogue (and meandering monologues) can be repetitive. And by the time you hear Edmund waxing poetically about being on a ship, you wish that you sail away from the theatre instead. (Meanwhile, the act divisions made you feel even more aware that you were in for a long show: perplexingly, a curtain on a rail would slowly be dragged across the stage , making you think the cast is taking a quick shower between scenes.)

There are many worthwhile elements into Long Day’s Journey. Eugene O’Neill is a revered playwright for a reason, and his plays have laid the foundations for American drama. Roundabout’s revival is just as worthwhile as the play, and its actors give one heck of a show. I do wish that like a Shakespearean tragedy, the revival’s creators could have taken a red pencil to the script and picked up the pace. Instead, we are left with one frustratingly long night.